See how Vitacoll Gold has helped these people 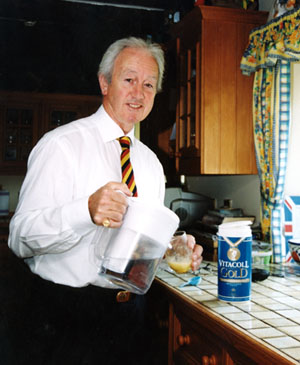 Bob Taylor had an astonishing career with Derbyshire and England and ended up as the world record holder with 1649 dismissals during his professional life as a cricketer. In addition he jointly holds the record for most dismissals in a Test Match innings (seven).

Having always prided himself in his physical fitness he found it difficult to accept that after 30 years of playing cricket he was diagnosed with osteoarthritis. Not as you would think in those hands which took a constant battering from some of the fastest bowlers in the world nor in his knees as he leapt up and sideways to make fantastic stops and catches. Let Bob tell it.

"During my career I must have gone up and down over a million times. My whole weight was centred on my toes and the balls of my feet and therefore it was of little surprise that when I was diagnosed with osteoarthritis it was in my big toes. It got progressively worse until sometimes I was practically crippled. I tried various remedies but nothing seemed to work long term. Then I was introduced to Vitacoll Gold and started to try it. At around six weeks I started to notice an improvement. This continued and I have been taking Vitacoll Gold for over two years and to be honest I don't even think about my arthritis these days. Vitacoll Gold is easy to take as an orange flavoured drink, which reminds me of a Caribbean fruit drink and is very refreshing. Its easy to mix and worth the effort to take it regularly." 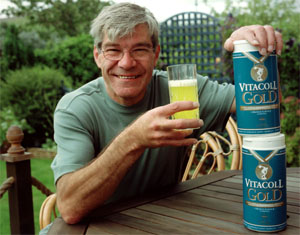 As everyone knows the life of a professional footballer can be very precarious and no one knows that better than Malcolm Macdonald the ex England and Newcastle striker. After many years at the top flight of English football all those attempts to prevent him scoring (and usually failing) started to take their toll.

Malcolm's prolific career was brought to premature end due to arthritis in his knees and even after retirement the problem did not abate.

Malcolm said "some days it was so bad that I could not even get out of the house". In 2000 Malcolm started taking Vitacoll Gold, "its just like having a an orange drink once per day". Within the first month he started to notice an improvement and at the end of two months he was feeling a whole lot better. "I think nothing of taking the dog out for a couple hours walk these days" said Malcolm.